There is a saying that a picture is worth a thousand words. That can very true. The addition of a photo on a business review can trigger thousands of views. Customer reviews are valuable. I talk about why in two blogs, Six Steps to a Meaningful Testimonial and Online Reputation: A Love-Hate Relationship.

Steve Gasser, Chief Evangelist at Vivid Image, is a fan of reviews. He sees their value for businesses. Because of that he often leaves reviews for businesses that he visits.  In the blog, Six Steps to a Meaningful Testimonial, I mentioned the fact that I am a Google Guide. This is a program for people to leave feedback on businesses including reviews. There are five possible Google Guide levels. I’m a level two. Steve is a level four, which means he’s written a lot of reviews and has been doing this for awhile.

To add extra impact to a review, the addition of a photograph can be very beneficial. This past July while in Hong Kong Steve visited a Starbucks, took a photo and included it with his Google review. That photo now has 7,253 views and counting. Personally I think it is getting lots views because it is a good representation of the business location, plus it has some fun personality!

This is the original photo Steve posted.

This is how the photo is displaying in Google maps and reviews.

The view from Steve’s phone on Contributions on Google Maps. 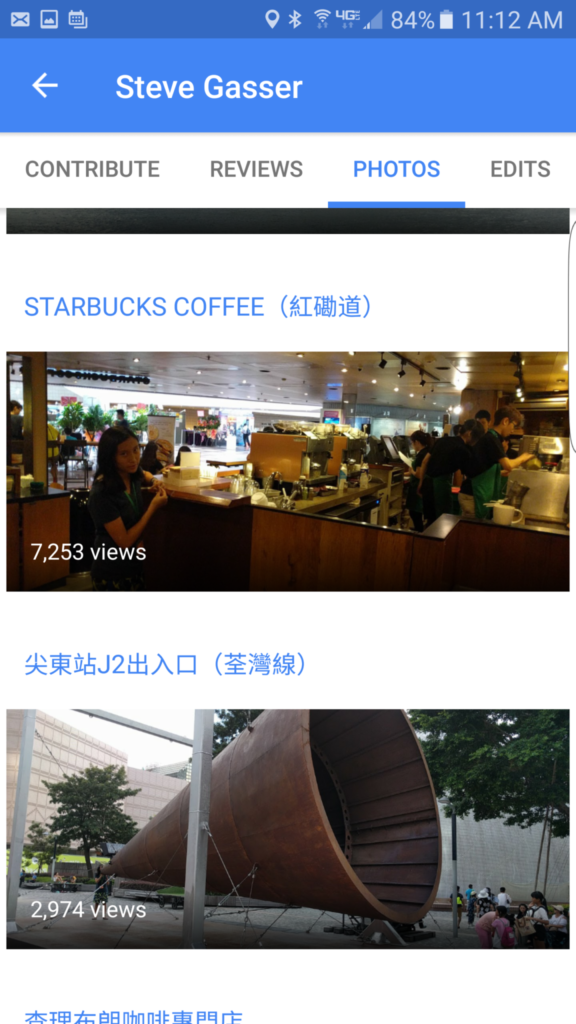 Photographs are an important portion to any message. They can add a lot to a written message. If you are leaving a review consider including a photograph. If you are a business sharing a review or testimonial from a customer ask if they have a photograph that you could include. Photographs can be worth a thousand words and views.